The Hash House Harriers (HHH) are best described as a ‘drinking club with a running problem’. The World Bank’s country manager for Georgia, Roy, was the local ‘Hash Master’ and when he heard that I was a runner he invited me along. So one very cool Sunday at 15:00 I found myself with a group of runners and walkers ready to start on our adventure.

Before going any further, it is important to explain what a hash is: Wikipedi describes it as: “A typical hash kennel (local chapter or group) today is a loosely-organized group of 20-100 men and women, aka Harriers and Harriettes or hussies, … Kennel members meet to follow a trail laid by a hare (the person(s) leading the trail who leaves the appropriate marks on the ground, trees etc. for the pack to follow). While strips or pieces of paper have previously been used to mark trail, especially in tropical areas, it has generally been replaced with flour or chalk, with toilet paper often being used in off-road areas that would make the other marks difficult to see.”

So that is the basics. A group of runners and walkers get together to follow a trail which has been laid earlier. Things then can get complicated: “Often the hare will employ several tricks in attempts to slow the pack and to keep runners and walkers together. The hare may mark an intersection – generally called a “check” – that signifies that the trail continues within a 360 degree area from that point. Several false trails may lead from that check and it is up to the front runners to “solve” the trail by going out and determining what might actually be the correct path, or “true trail”.

There is also a definite culture and vocabulary associated with the hash: “A member of the pack calling out “Are you?” means to know if another individual is searching for the true trail, typically near a check (or intersection), or is on the correct path. Someone will typically call out either “Checking!” to indicate that they are looking for the trail or “On-On”, or blow their whistle or horn three times, to signify that they are on the true trail and that the pack should follow them. Otherwise, the member may shout “Flying!” or give a couple of “wing flaps” with their arms indicate that they have abandoned the true trail in search of a short cut; others should only follow at their own risk.”

The goals of Hashing are said to be:

When arriving in a new country I’ve always found it to be one of the best ways to meet the expatriate community, even though I don’t drink alcohol or beer.

The pack today numbered about 40, comprised mainly of expatriates, but there were still quite a few Georgians. Roy was surprised at how many turned up as there had been quite a party the night before and he thought that hangovers would have had a greater impact.

I was surprised to see someone wearing a NZ America’s Cup jacket. Richard was an Aucklander who had recently moved to Tbilisi with is partner Anna who was Swedish and working on a Swedish aid project in Georgia helping dairy farmers. We sat together in the car with David, from England, who was working in commercial property development as we drove to the hash start near the airport.

The run was to be in the countryside and being late winter, the trees were bare. Although the skies were gray, the promised rain never eventuated which was nice. After having some water we were told by the hare some of the basics of the course–like when you come to the river crossing go 20 m downstream where it is easier–and then we were off looking for the trail.  The photo below gives you an idea of what it was like with an American Kate in the foreground. 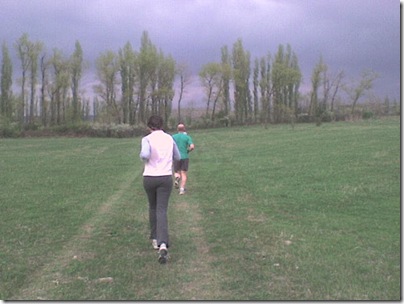 Very early on we came to a check point, and Richard along with a Georgian ran off in the direction marked “W” as opposed to the correct one marked “R”. That was the last we saw of them for over an hour as they were on the walkers trail.

The trail was hard to follow at times, as the hare had been a bit too sparing with the flour–at least in my view. He tended to put the flour on the copious number of cow pats that lined the fields, but even then they were hard to find as the terrain was very undulating.

We ran over hill and dale, with lots of false trails and getting lost even when we were in theory on the correct trail. The run took us through cow paddocks – where I feared I would fall and twist my knee because the land was so rough – over fences, through vineyards, and past many a confused local farmer, such as the two ladies below. 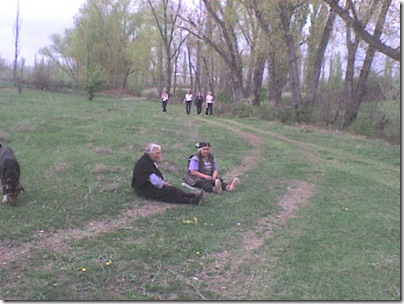 It was fun to be running outside with others and the beauty of all the false trails is that even if you are in the lead at one point, you can guarantee that you will go wrong somewhere and end up at the back again.

Towards the end we totally lost the trail, in fact it was just after I took the photo above. No matter how much we looked we couldn’t find the trail anywhere. Eventually Roy, myself, Richard (who we had finally found) and two others ended up at a road at which time Roy started to use his GPS watch to try and get us back. It worked really well. We were the VERY LAST to get back to the start point! Everyone was standing in a circle and so it was an embarrassing return as they cheered our arrival.

Wikipedia describes the post-race ritual as follows: “… At trail’s end hashers gather to drink beer and observe the traditions of the “Circle.” This typically consists of drinking more beer; this time ritualistically. Circles may be led by the hash Grandmaster, the group’s Religious Adviser, or by a committee of mismanagement. Traditions and the degree of rowdiness vary from hash to hash, but in general the Circle consists of awarding “Down-Downs” for misdemeanours real, imagined, or blatantly made up. Generally the activities will also include the group singing of bawdy drinking songs of the type that can be heard in a pub, fraternity party, military get-together, rugby match, or other such social gathering. These songs are also published and distributed to members in the form of so-called Hash House Hymnals”.

Roy, as the Hash Master, led the ceremony and yes, there was a lot of beer drinking. However, unlike some Hashes I have run it was also acceptable to drink water or sodas, so I was okay.  There are a series of “Down-Downs” given wherein you have drink the entire contents of your cup. These can be for things such as running too fast (my misdemeanour), wearing your hat in the circle, being a “Hash Virgin” (i.e. your first Hash), getting lost, etc. Roy led all of these with panache and I wish that all of the World Bank’s country managers would be so care-free and willing to do a down-down. This is Roy below with the flour bag in his hand. 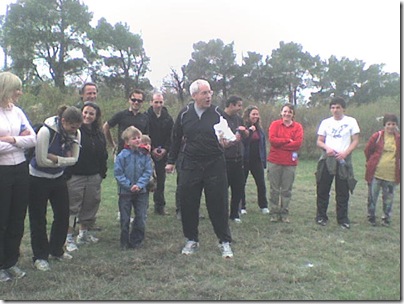 An important part of being a Hasher is to have a Hash Name. Some are quite bawdy, but mine (give to me in India) is not. I was named “Gordon Bennett” which is an English slang term used to convey surprise/disbelief.  Today one of the Harriettes was to be named so we all took a handful of flower and as she was kneeling on the ground put it on her. She took it very well … by following up with a beer! Mine was easier – they filled my dirty shoe with water and I had to do a Down-Down. Then again, we had just been running in New Delhi so the shoe was not exactly hygienic! 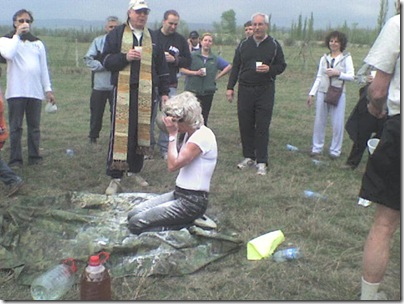 BTW: One can get into a lot of trouble with flour. In 2007, a “bio-terror” alert was triggered in New Haven, Connecticut due to hashers using flour, and the two hares (who spread the flour) were charged with a felony in an event known as the Hamburger Hash Affair.

After the Hash was over we decamped to a restaurant on a hill above Tbilisi and about 25 of us had a group dinner. Met some very interesting people and had great discussions, as well as excellent food. The day was long but fun, and I’m looking forward to future runs with the Tbilisi Hash.

This entry was posted in Training. Bookmark the permalink.