Readers of this blog will know that I consider the Luxos U to be the ultimate dynamo light – at least for road bikes. I have two of them and have relegated my Supernova E3 to my seldom ridden bike.  Brilliant light and an integrated USB connection which powers my GPS and other kit. What more does one want?  A better bike mount. I did an earlier post on one solution, but I now have two others …

The Luxos mounting system is a simple “U” shaped clamp which you connect to your brake. However, if you are running a disc brake there is no way of using this easily so it requires some creative thinking. In my earlier post I showed how you could mount this to your aero bar as shown below. 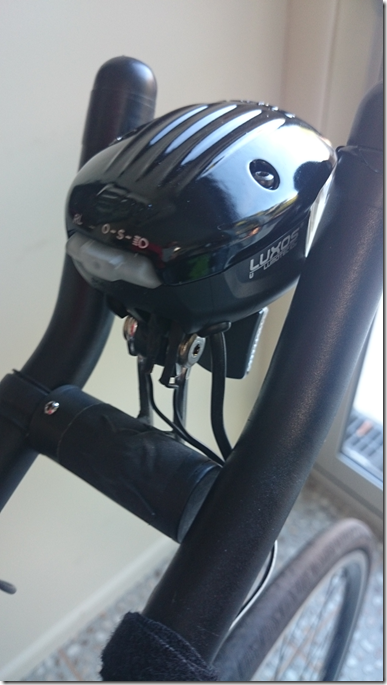 I have now found an even better solution, thanks to my Supernova E3 …  Supernova have a very nice metal mount which consists of a semi-circular clip which is held in place on your handlebar or aerobar by a rubber O-ring.

The diameter of the Luxos plastic is wider than the Supernova mount, but a few minutes with my multi-tool grider solved that.  I also glued the bottom bolt to make sure it would not move.  An alternative would be to modify the Luxos, but safer not to fiddle with the Luxos’s structural integrity.  Once completed it was easy to mount and move between bikes.

A second option which is even easier is to use a digirit mount.  I used the bike flashlight mount but you could also use their beam and follow my earlier instructions for mounting permanently.  The digirit mounts are attached to the stem head by replacing two bolts.  The torch mount has an adjustable circular ‘bit’ at the bottom. All you need to do is to use a longer hex bolt with a washer and you can then attach with the usual Luxos mount. 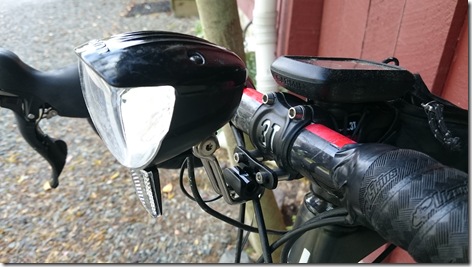 There are other options that I’ve tried—such as the Minoura head set mount, other stem mounts (I’ve a bin full of used mounts!) but the above are the best solutions that I’ve found. Pity that Busch and Muller can’t engineer better mounts as they are the only weak point of their offerings. I only managed to get the rear light mounted to my bike using a different clamp with epoxy!

2 responses to “Mounting the Luxos U Light – Part Two”