The North Cape – Tarifa (NCT) race ran from the northernmost point in Europe in Norway, to the southernmost point in Spain. Spanning 13 countries, it is the longest bikepacking race one can do at 7,390 km with over 65,000 m of climbing.  It took me 29:10:30 minutes for 10th place, an average of just over 250 km/day.  It was an incredible adventure and I was pleased to participate in the inauguration of what deserves to become one of the top bikepacking races.

The race was run in a number of stages, with five check points at key locations (usually the top of a big mountain to climb!). It says a lot that one can only properly visualize the route on Google Earth!

The race organizer Andi Buchs had set out not only to make a challenging race, but above all one which was VERY safe. I can count on one hand the number of times I felt I was on a dangerous road over the entire 7,390 km. And that is with fingers to spare.

This really set the race apart from others where the organizers either are not overly concerned about the traffic situations, or allow riders to select their own routes. It is simply impossible to know how safe a road is without being there on your bike, and Andi rode the entire route when planning the race. As a result, he sometimes took us off the beaten path (to be kind) but always with a good reason. For example, we are on a busy road heading into Riga Latvia with a good shoulder when we are taken off to a soft sandy unsealed road for about 60 km. Andi said this was done because the shoulder vanished and there were lots of trucks. I’ll take sand over road kill any day! Other race organizers should learn from this approach as it greatly reduces the risk to riders… and we’ve been losing too many of late.

We experienced the full range of conditions—from hot to cold; wet to arid; flat to mountainous. In fact, the ride has the greatest extreme elevations I’ve experienced, from 211 m below sea level in a tunnel in Norway to the top of Pico de Veleta (Europe’s highest paved road) in Spain at 3,390 m. Below is a sample of what we experienced.

Poppies made me think of my wife 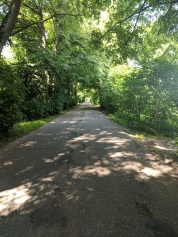 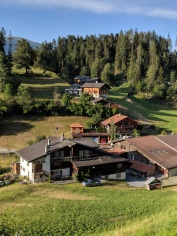 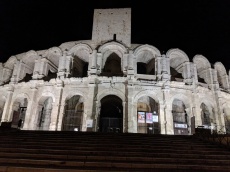 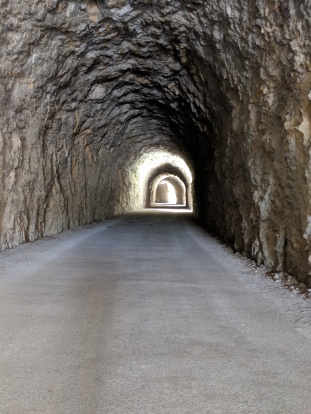 Some observations on each country: 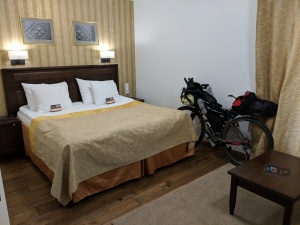 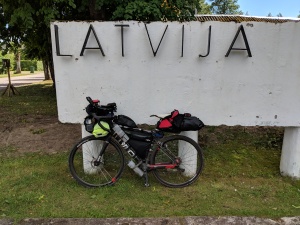 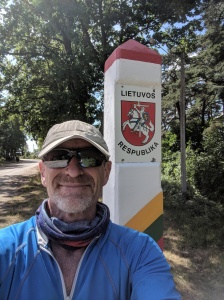 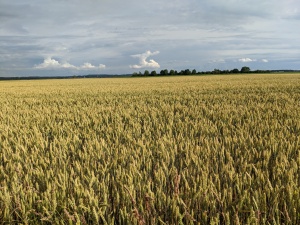 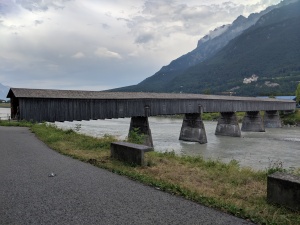 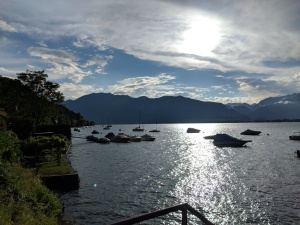 Nice was not so nice … A local said worst of French and Italian driving. 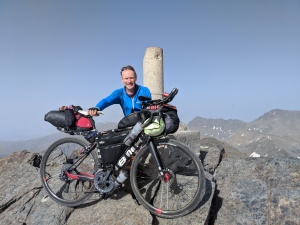 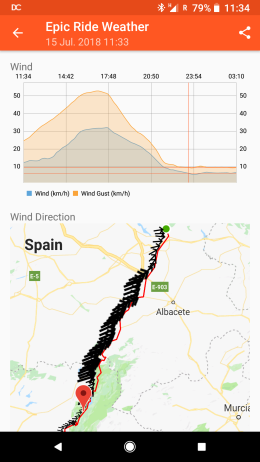 As with all races, in the 38 who were foolish enough to show up at the start line there were familiar and new faces. Pretty soon we broke into the natural ‘groups’ based on the distances we were covering. Steffan, Kai and Samuli were all doing about 350 km/day on average so were gone from the start; myself, Mike, Javier, Anisa, Claus and Morten were in the 250 km/day band, some faster, many slower.  I spent most of the race riding alone, but when we would bump into other riders–or ride with them on and off for a time–it was always a treat.

Anisa Aubin in Spain. We rode together on an off from Norway, particularly in Spain. 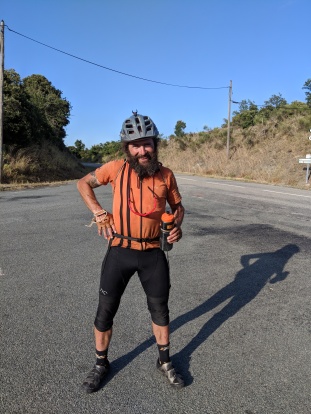 Javier Simon who rode on a singlespeed and got 7th place. Incredible athlete.

Mike Sheldrake on the way down from Pico de Veleta.

It is one of the highlights of these races meeting new people and spending time with them. Or not. I rode on and off with Anisa Aubin the most, particularly in Spain. Anisa, Mike Sheldrake and I were battling for 8th to 10th after the mad singlespeeder Javier blew past us and got 7th place. They dropped me after Pico de Veleta when I had altitude problems and had to take a break before the final push to the end.

The photos below show some of my experiences. Details are in the captions. 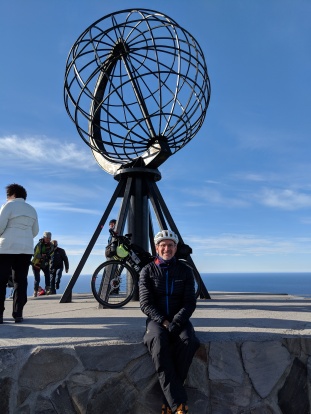 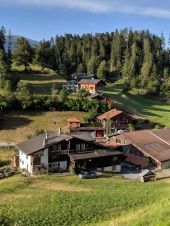 Poppies made me think of my wife

Sheltering from an afternoon storm in Switzerland. 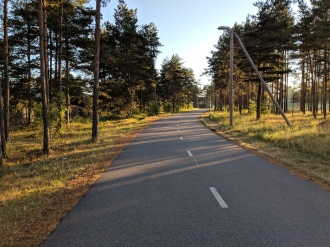 Lowest point on the route: 212 m below sea level

At the start – well north of the Arctic Circle

Out of Italy into France … was a tough climb, and cold descent.

The road up to Petit St Bernard 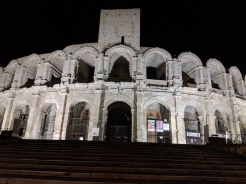 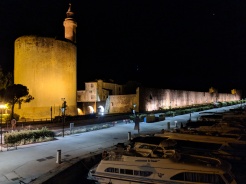 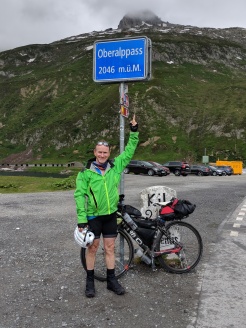 The Swiss mountain passes were a lot easier than Spain’s. Go figure!

3 a.m. shadow in the midnight sun of Norway

Burning some 5000+ calories a day, food becomes a bit of an obsession during races. Being vegetarian, I find myself taking photos of food as it is such a treat to get a good meal. To help me along the way, I carry a piece of paper which says to the effect: “I am a vegetarian—no meat, chicken or fish—and really hungry…” Thanks to Google Translate, I had it in the language for each country we passed through and it came in useful, particularly in Spain.

I would say about 75% of the time it was not possible to get ‘real’ food, and lived on what was available from petrol stations or something similar. This is one reason why I drop about 5 kg in these races: I’m hungry a lot of the time. When one can get a proper meal, it is such a treat that I would inevitably take photos like below. My record was when I actually got three meals in a row!  My main foods were: ice cream (record for this race was eight in one day; more would be gluttony), drinking yoghurt, and some form of bread. Not the healthiest nutrition to travel 7,390 km on! 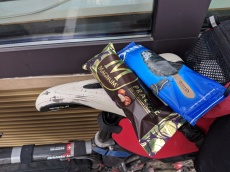 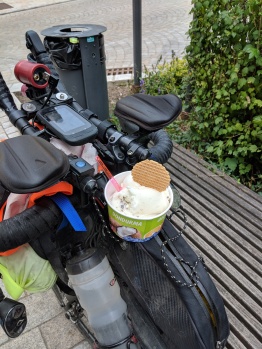 Sleeping is always an adventure in these races. I travel with a sleeping bag, mat and bivy bag which means that I can quickly get set up for sleeping. It is all rolled into one so just unroll the bivy bag, inflate the air mattress, and climb in! There are others who take only a bivy bag and nothing else—the idea being if you wake up cold get on your bike and ride to warm up. That does not work for me as I know that being cold is one of the things that would take me out. I was really pleased to have my sleeping bag as some nights it was about 5 degrees and I was very cozy.

In the race I practiced was we call ‘stealth camping’. In other words, I’d sleep places where I was probably technically not allowed, and hope to get interrupted. My spots were sports fields (these are the best as there is nobody around at night and early morning), campgrounds (in Finland I bivied in the children’s play room), empty fields, etc. The most embarrassing was when I bivied in the entrance room to a sauna at a campground in Finland. I was actually someone’s suite called the ‘sauna’ suite. The police came but were very friendly in asking me to move on, and used their GPS to point me to a spot across the road.

The advantage of bivying is that you really do maximize your time cycling. Find a place on/near the route, drop, sleep, and get out early before anyone finds you. For this reason I had planned to mainly bivy but I had to change my plan when my concussion symptoms began to re-emerge: I needed to sleep properly. So whenever possible I grabbed a hotel room which www.booking.com was excellent. Unfortunately this often meant stopping my rides by 21:00 when is when check in usually closed, but the better rest made a huge difference in managing the concussion. It also meant I could regularly wash my clothes—Lis said she’d never seen me looking so clean in a race!

Anisa testing out my bivy kit by the roadside in Spain

I’ve posed elsewhere the gear for my race and I’ve got things pretty well refined and there are only minor changes I would do for future races.

Full service in Bregenz Austria. They also retuned the Di2 which helped.

Posnan: Another drivetrain after only 1200 km!

Rear wheel started ‘bouncing’ in Switzerland and thought it was out of true. Bike shop on route put it down to a faulty tube … hideously expensive, but worth it!

After 29:10:30 it was great to reach the finish line, but I felt like I wanted to keep riding! I was physically feeling great with no saddle sores, numbness, and I was not spent. Unfortunately, it was time to return to the real world. I was welcomed by Andi, Javier, Mike, Anisa and Steffan who had won the race. This was really special as too often we finish the races and there is nobody to share the experience with. Anisa and Steffan headed out that day and I had nice dinner at the beach with the others.

About 5 kg lighter than when I started.

At the finish. Myself, Mike, Andi, Anisa, Javier and Steffan

Finishing on a flat tyre.

The next day I flew to Munich to head over to the Tyrol in Italy to join my wife for some hiking in the Alps and ‘recovery’ time before heading back to New Zealand. Had a bit of a disaster at the airport–as I was moving my bike, box and bags to get everything packed somebody stole my bike box! I ended up getting the bike ‘shrink wrapped’ which was less than desirable, but the bike made it to Italy. Our friend Rickie Cotter joined us which was special. We met at–and finished–the 2014 Transcontinental together and she’s now part of the family. Rickie and I decided we had to ride Stelvio Pass so that was an adventure, particularly because I broke my derailleur hanger about one-third of the way up. Being the sensible type I decided the best option was to convert the bike to a single speed and we finished the ride. If it was good enough for Javier it was good enough for me! 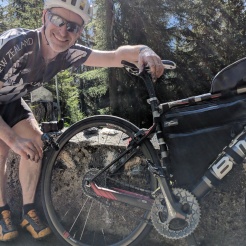 Rickie and I at the top. Last time there I slept in the ATM machine! 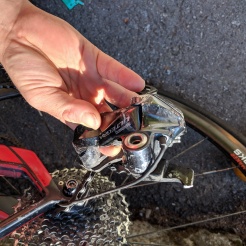 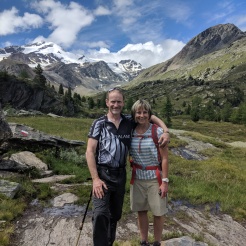 Lis and I hiking.

The NCT was an incredible adventure and thanks to Andi and the other riders for making it my best bikepacking experience ever. If you are considering a race, it should be at the top of your list: even just one of the sections. You will see amazing scenery, meet interesting people, and challenge yourself, while also being much safer than probably any other race. Well done Andi.