2009 Boston Marathon – It’s in the Execution

Last year I ran the Boston Marathon and managed a 3:40. I was very pleased with this effort since I was jet lagged and also stopped a few times for photos with Lis and Sharon. I wanted to enjoy the

Boston ‘experience’ and it was a great race. Afterwards I resolved to return and do it again and try for a better time so  Lis and I found ourselves back in Boston with some 26,000+ others for the 113th running of the Boston Marathon on Patriot’s Day weekend. I managed a 3:27 which I was very pleased with, as you can see from the post-race photo to the right.

We arrived on Friday with Jet Blue airlines from Washington D.C. I really enjoy flying Jet Blue and find it superior to any other American airline that I have travelled with – even Air Canada! Clean, efficient with friendly staff. Quite the opposite to United.

The weather was brilliant, sunny and about 25 degrees, although there was a biting wind. We wandered around the waterfront and decided to go to the aquarium. However, upon seeing the size of the queue gave it a miss: we learned a few years ago that aquariums during school holidays, where there are lots of children, are not a fun place to be.

We ended up at the market and got some lunch. There were a trio of acrobatic buskers from England doing a great show so we sat on the ground in the sun and enjoyed watching them. They had amazing agility and balance. Given that they were working on hard stone pavements it was very dangerous for them – which made it even more impressive. When then saw a second busker who was an Australian – with the vocabulary of a trooper. I’ve never heard an American busker calling someone a ‘cheap Bastard’ for leaving a show early! He also had a unique line for getting donations: if he didn’t get enough money he would be forced to stay in the USA and mate with an American.

Eventually it was time to go and collect my race packet. It was much easier this time as we knew the routine. We parked near the centre and walked over. After getting the packet we visited the race expo which is the best of any race I’ve been to. Not only lots of free samples, but interesting things to buy.  I had hoped to buy some more ‘Drymax’ socks which I had bought the previous year but they were unfortunately not there. Nevertheless, we didn’t walk away empty handed, I managed to score another pair of Sugoi compression socks, a signed copy of the ‘Spirit of the Marathon’ DVD, a signed copy of the great New Zealand runner Lorraine Moller’s biography – it was neat meeting her and she invited me to look her up if we every get to Boulder Colorado where she now lives, and lots of samples of food, drink, and munchies. All in all an excellent expo.

I have been doing the ‘Endurance Nation’ triathlon training program and they had a lunch for those running the marathon (which was against the coach’s recommendations). We met at the ‘Cactus Club’ across from the race expo. Coach Patrick is the fellow at the front left. It was really fun to meet the other triathletes and hear about their experiences with the program – which were universally positive!  With Patrick here in Boston there seems to be a good sized training community.  Linda (front right) and her husband were at the race and I saw them around mile 10 giving out tissues so I gave her a greeting hug. Patrick was supposed to be around mile 13 but I didn’t see him.

We stayed again with our friends Sharon and Brian Warren in Andover. They studied nursing with Lis 25 years ago and are now working for Philips medical in the USA. It was great to see them again and catch up. We’ve resolved to go to Acadia national park together in August so I hope that eventuates. I spent the weekend relaxing, except for a short 2.5 mile run to stretch the legs. It was quite a luxury for me to chill out and relax, sitting and reading in the sun.

Monday morning was the day of the race. Sharon, Lis and I left to drive to the start. I voted for an 8:00 departure but the ladies preferred 07:30 so we did it their way. On the positive side, we had no problem finding a parking spot, but we also had like 1.5 hours to wait for 10:00 race start. This wouldn’t have been so bad except it was VERY cold with a wind – less than 5 degrees C.

I decided that the ladies needed to buy themselves a warm drink which gave us the excuse to shelter inside a restaurant. Excellent choice and we exited just before the race started. It was a tough call as to what to wear but in the end I opted for shorts with arm warmers, which proved to be a very good call as I would have overheated with anything else on. In fact, by mile 5 I rolled the arm sleeves down.

training run for the Comrades Marathon in South Africa next month. In fact, there were quite a few Canadians in the race and as I was wearing a Canadian running shirt I got quite a lot of support from the crowd.

For the race I decided to adopt a strategic approach. Normally, I only run based on how I feel but as my preparation wasn’t stellar, if I wanted a good time I had to run the race very smartly. I had serious reservations about my ability as two weeks before the race I had my final 20 mile long run. I felt so bad on the run I called Lis after mile 15 and had her come and drive me home. Not an auspicious end to my training program. 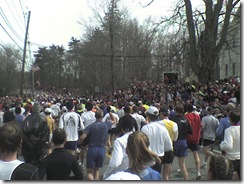 I worked very hard to keep to the goal paces. This would hopefully allow me to have enough reserves to finish strong. I can tell you that with so many fast people around you it is very, very difficult not to go fast, especially at the beginning of the race when you have so much energy and adrenalin. With my Garmin GPS watch giving me the times, I did my best to stay near the target paces.  More than once I had to tell someone I was running with that I was backing off the pace to save my bullets for later in the race.

The other part of my race plan was nutrition. I took some ‘Sport Legs’ calcium/magnesium supplements along with ‘Endurolyte’ electrolyte supplements before the race started. Before the race, I had 300 calories of ‘Cytomax Preformance’. During the race, from 1:00 onwards I had 100 calories of ‘Accelerade’ energy gel every 30 minutes. This was supplemented by water at every aid station.  In theory this was just enough to get me through the race and my calculations proved to be correct 🙂

The crowd was fantastic as always. Especially Wellesley College with the tunnel  of screams. It really sends a chill down your spine to have so many women

screaming so loudly.  I was also impressed by the disabled runners – like this young woman missing her lower leg.  She was doing about a 10:00/mile pace which was very respectable. I also passed a fellow pushing himself backwards in a wheelchair!

Lis and Sharon were kept abreast of my performance via text messages, and we had planned to meet at the top of ‘Heartbreak Hill’. Last year they tried to meet me at multiple locations but it was very stressful for them. Since Heartbreak Hill was near the streetcar, the plan was to meet there and then they would take the streetcar to the finish line.

Sharon also called me on my cell phone regularly and so she was expecting me when I crested the hill – they got the photo to the right. As you can see I was not walking! In fact the race was going very well.  I was ahead of pace and now, with only 6 miles to go, the worst was over: from here it was largely downhill.

My strategy had worked and I felt very strong. I was able to up my pace and I began passing a lot of people. I thanked the coaches at Potomac River Running Club – Margie Shapiro, Ray and Cathy Pugsley – for teaching me how to run downhill. You lean forward and use gravity to help you accelerate and you increase your turn over. It’s incredible how many people lean backwards to counter gravity and work against it.

It’s amazing how quickly the last miles go, in some races it seems like forever, but not here. The streets are lined with loud spectators who are cheering you on and providing a huge level of energy. I positioned myself to the right and passed a lot of people, including many who were walking.

Finally, I reached the right turn which signalled that the end was near. With the left turn it was then hit down the hammer and go for the finish line. So near but yet so far, but eventually I crossed the line after a great race.

The chart below compares my target pace against what I achieved. I have also put in last year’s performance as well. The big difference? Slower at the start this year and much faster at the end! I think that the spike at mile 14 was when I stopped for a photo with Lis, however, it is clear that I paid the price for my speedy start. 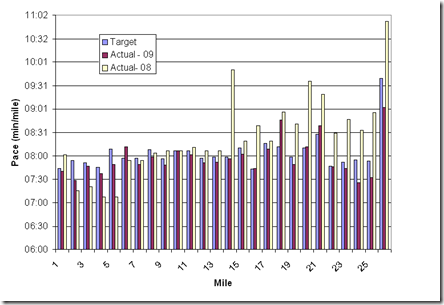 My final results were:

My pace times were surprisingly consistent:

It had been an overcast day with moderate wind but by now the wind was up and it was quite chilly. The post-race organization was brilliant as ever. First they give you a bottle of water. Then a space blanket. Then a bag with bagel, granola and chips. Then a banana. After removing my timing chip I received my finisher’s medal. One poor fellow was screaming in agony as he staggered by supported by two medical volunteers: leg cramps big time. Thank heaven for Endurolytes. This year, I had left a post-race bag with warm clothes which I was very thankful for since Lis and Sharon were delayed in getting to the finish line.

We eventually met and then caught a taxi back to the car, and home for a well deserved bath with epsom salts. Since it was about an hour after I finished I didn’t need to take an ice bath which was nice. Lis insisted on me showing off my medal.  I then packed it away and we headed to Boston airport to head home. There were a lot of other runners at the airport, many of whom insisted on wearing their medals. It’s something I don’t understand. After all, we are staggering about so it’s not hard to spot a marathon runner! We ‘stealth’ competitors were definitely in the minority.

My time has qualified me to run Boston again next year. Not sure if I will do it, but I’m grateful to have the option. It’s a privilege to be able to participate in such an august and challenging race.  Now time to shift the training focus to Ironman triathlon for Louisville in August…

This entry was posted in Racing. Bookmark the permalink.